Curating your feed, finding your friend groups, and getting into online arguments

Each year, I embark on a journey to re-read Austin Kleon’s Steal trilogy, and each time I read it, something new grabs my attention. I was struck today by this image from a chapter in Keep Going called “Like-Minded vs Like-Hearted”: 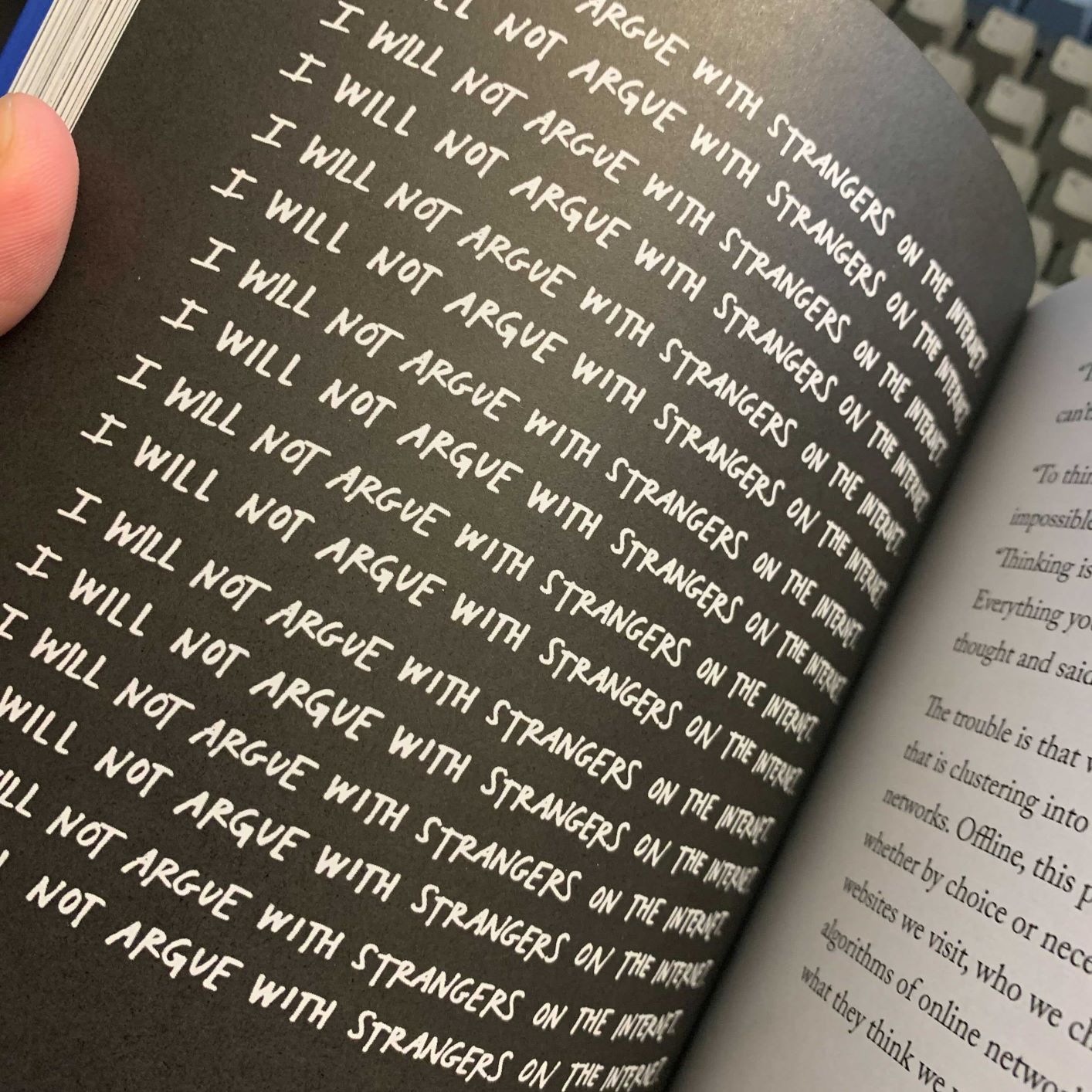 A pretty obvious callback to the Simpsons and their opening chalkboard gag!

Like many people, I’m not immune to getting drawn into online arguments - just ask the folks on the Dynasty Movement Discord server about my many different soapboxes - so reading this immediately after having been drawn into a particularly vivid discussion hit a little closer to home.

I’ve heard many a time that you should never get drawn into an argument online: it’s impossible to win, petty trolls cannot be fed, and that it’ll have a negative impact on your work, life, and mental health. It’s easy to point to examples of this - a notable Twitter presence making personal attacks, someone repeatedly moving the goalposts on a debate, or someone standing up for an controversial idea and getting bombarded with bits of conventional wisdom - and think that you’d better served by avoiding confrontations altogether.

“To think independently of other human beings is impossible. Thinking is necessarily, thoroughly, and wonderfully social. Everything you think is a response to what someone else has thought and said.” - Alan Jacobs, How To Think (c/o Keep Going)

I’ve spent a large amount of time trying to fill my Twitter feed with thoughts, ideas, and opinions from brilliant and insightful people, on topics that I want to get better at. I want my feed to be intelligent, open, and thought-provoking. I’m not as interested in helping others make it big, amass follower counts, become more influential - heck, I’m not looking to do that myself! My Twitter feed is precious to me, and I’m fastidious about stripping away the content that doesn’t fit those goals, or just plain old doesn’t make me happy.

This is both a blessing and a curse: it’s very easy to fall into a trap where you fill your feed (and friend groups) with like-minded people - the people who like the same programming language you do, the same dynasty fantasy strategies, the same analytical methods. Having too much in common makes it tricky to find your own space and niche within your friend group, and you become deeply set in your ways.

If you really want to explore ideas, you should consider hanging out with people who aren’t so much like-minded as like-hearted - those who are temperamentally disposed to openness and have habits of listening. The ones who think about what you’re saying rather than just reacting.

This is a really valuable idea - and one that I feel like I need to strive for, and keep striving for. I’ve backed into finding like-hearted people in my feed, inadvertently, because I’ve been following more and more open source sports data and R stats community members, and that community is inherent more likely to share, listen, and celebrate each other’s achievements.

I’ve also lucked into a community in the TDM Discord where I feel comfortable making those online arguments and challenging opinions, because so many folks there feel like-hearted to me - they listen, they challenge me to be articulate my opinions, and when we disagree we can still respect each other’s opinions. It’s rare that I feel like I’m left angry or drained after spending time there.

The takeaway from the chapter, for me, is that I should continue to strive to surround myself with like-hearted people - on my Twitter feed, in my Discord/Slack communities, and in real in-person friend groups. I’m lucky to have the communities I’m in, and I’m very glad to be able to get drawn into debates amongst my like-hearted friends.

I immensely recommend Austin Kleon and the Steal trilogy to everyone, especially those looking to “make it” as a creator, programmer, or data analyst.